There’s a reason magazine covers include lines like “5 Moves for Michelle Obama Arms” or “The Secret for a Booty Like Beyoncé.” But if you’ve ever found yourself wishing for this actress’s waist or that singer’s legs, remember this: The media’s concept of the ideal woman’s body isn’t static. Whoever People magazine deems “most beautiful” this year is just a representation of what has bubbled up in the cauldron of pop culture. That silhouette of the “ideal woman” has been put through a series of fun house mirrors (fashion, movies, pop music, politics). It also changes year over year, so the physical qualities we embrace today are often at odds with those from previous generations.

To prove our point, we’re taking a closer look at body ideals over the last 100 years—which shows that, as they say on Project Runway, “In fashion, one day you’re in, and the next day you’re out.” 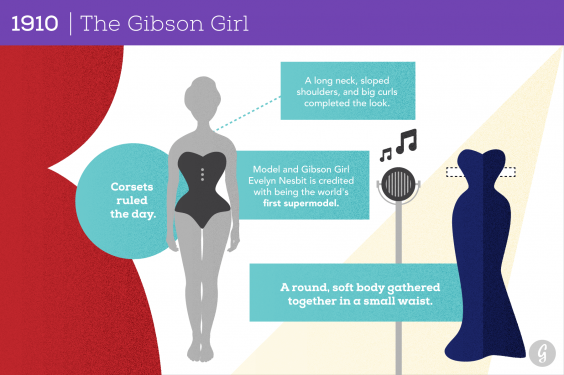 Meet the “it girl” of the era: the Gibson Girl. Illustrator Charles Gibson was to the early 1900s what trend-setting fashion photographers are today. His dream girl, broadcast on the pages ofLIFE magazine, Collier’s, and Harper’s, quickly became the Beyoncé of her era. Women raced to copy the signature look: A showstopping feminine body like a looping figure-8, thanks to a super-cinched corset. (Don’t try this at home!) Linda M. Scott writes in Fresh Lipstick: Redressing Fashion and Feminism, “The Gibson Girl was not dainty… she was dark, regal in bearing, [and] quite tall.”

But Gibson’s model and O.G.G. (original Gibson Girl) Camille Clifford was critical of the ideal. She sang in her vaudeville show, “Wear a blank expression/and a monumental curl/And walk with a bend in your back/Then they will call you a Gibson Girl.”

Say bye-bye to monumental curves, statuesque height, fussy updos, and all that jazz—and hello to the flapper. Unlike the frozen beauty of the decade before, the flapper is constantly in motion. The exaggerated curves of Gibson are gone and replaced with small bust and hips.

In fashion, the waistline moves several inches below the navel, making narrow hips a necessity. But don’t be fooled, the flapper doesn’t lack sex appeal; the focus has simply shifted downward to the legs, where a shorter knee-length hemline could expose the flash of a garter while doing a “shimmy.” Margaret Gorman, crowned as the first Miss America in 1921, was the era’s ideal. Her 5-foot-1, 108-pound frame was a full 180 from the Gibson era. 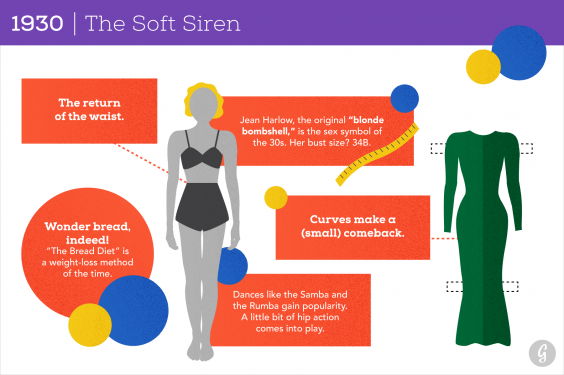 Following the stock market crash, spirits dip back down and so do hemlines. Dresses are now draped on the bias. Translation? A less boxy, more fitted silhouette. The natural waist (around the belly button) comes back and there’s a hint of shoulder too. And the flat-chested look so popular in the 1920s gives way to a small bustline, likely a direct result of the new bra-cup sizing invented in this era. The media embraces a slightly more curvaceous body, making this era a stepping-stone from the streamlined, petite look of the 1920s toward the curvier 1940s. Photoplay, the People magazine of its day, declares actress Dolores del Rio to have the “best figure in Hollywood.” The article applauds her “warmly curved” and “roundly turned” figure. 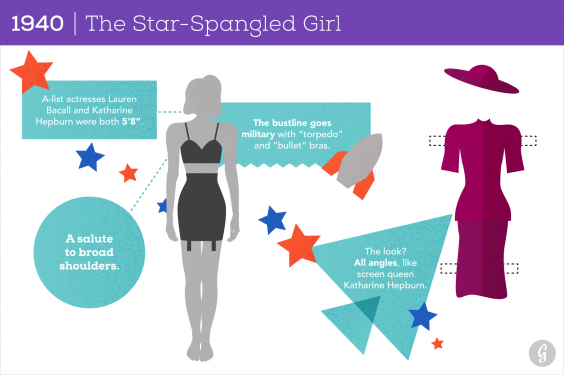 Atten-SHUN! There’s no farewell to arms… but there is a farewell to the softer look of the 30s. Thanks to World War II, military shoulders(broad, boxy, and aggressive) become the look du jour. Angularity is the order of the day. Bras take on a pointed look too, with names like “bullet” and “torpedo.” All that translates into the look of the moment: a long-limbed, taller, and squarer silhouette. Don’t be fooled by Rosie the Riveter, the ideal body type still doesn’t include flexing biceps. But it does become taller, and more commanding, possibly echoing women’s expanding role in the workforce while men are on the battlefield. 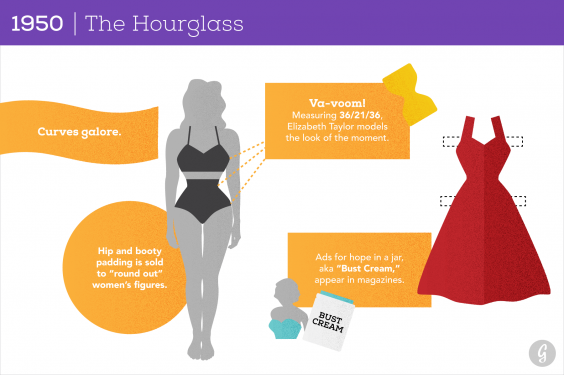 Welcome to the era of the hourglass. In the 1950s, the ideal body type reaches Jessica Rabbit proportions. After the angularity of the war era, a soft voluptuousness was prized above all else. Ads of the time even advised “skinny” women to take weight-gain supplements like Wate-On to fill out their curves. Playboy magazine and Barbie were both created in this decade, echoing a tiny-waisted, large-chested ideal. Fashions also showcased this body type with the rounded shapes of sweetheart necklines and circle skirts. 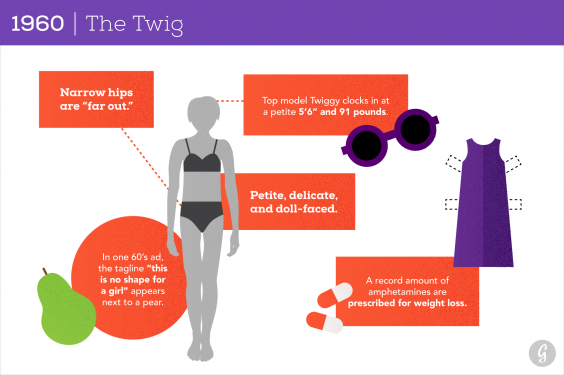 The swinging 60s brings the pendulum back in the other direction. Thin is in. And Jessica-Rabbit proportions are out. The look is now fresh-faced, girlish, and androgynously trim. Models like Twiggy andJean Shrimpton (aka “The Shrimp”) represented a new ideal: doll-faced, super slender, and petite. The clothing supports this look: shrunken shift dresses remove the cinched waistline, and fashion demands of a smaller bust and slim hips. (Sound familiar? It’s the same dramatic swing we saw from Gibson girl to flapper.)

More and more women are going girdle-free and embracing a less constricting wardrobe. The trade-off? Now that slim, flat-stomached look must be achieved through diet. Right on cue: Enter Weight Watchers, founded in 1963. 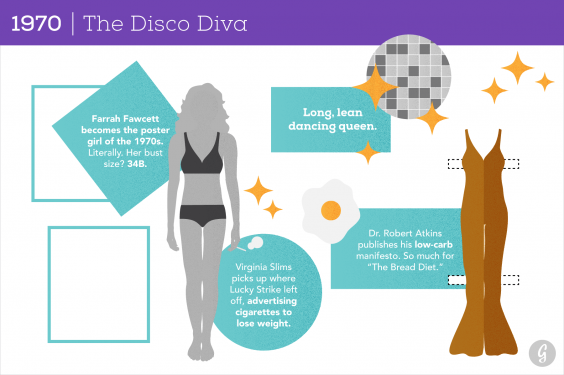 Disco! Jumpsuits! Bellbottoms! This decade was a raging party. But the party girl of the day was still pressured to maintain a slim-hipped, flat-stomached body in order to rock these fashions at the discotheque. Synthetic fabrics like polyester and spandex are embraced, but they’re also far more revealing and less forgiving compared to fabrics of the past. The overall look remains lean, especially in the torso, but curves start to come back.

Like the 1930s, this decade is a step away from the petite look of the 1960s. And following the black pride and “black is beautiful” movements of the 1960s, Beverly Johnson becomes the first black woman to grace the cover of Vogue, while Darnella Thomas stars in a groundbreaking “Charlie” fragrance ad. 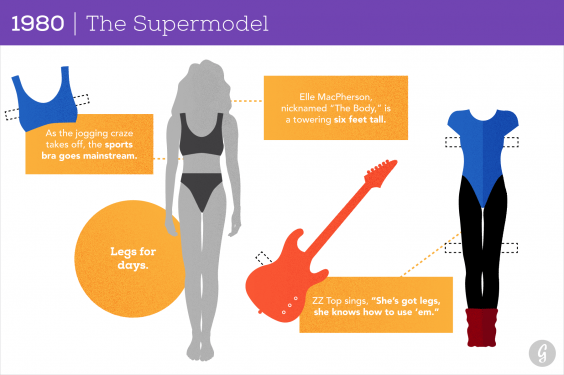 Amazonian supermodels reign supreme. These tall, leggy women come to represent the new feminine ideal. Women like Elle MacPherson, Naomi Campbell, and Linda Evangelista lead the stampede off the runway and into the heart of pop culture, dominating the media and music videos of this decade.

The 1980s also ushers in an era of fitness, thanks to a pioneeringJane Fonda. Aerobics and jogging take off, and for the first time, muscles are acceptable and desirable on women. It’s both empowering and discouraging—one more beauty standard to add to a lengthening list. 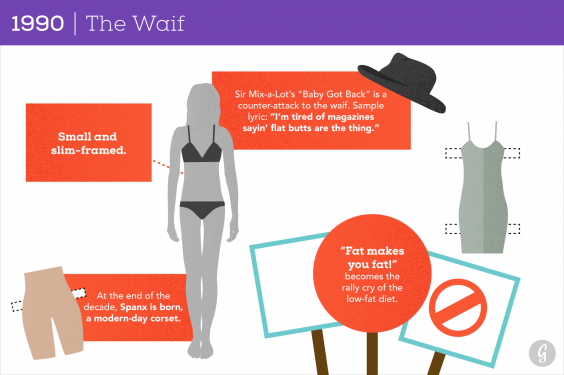 Honey, we shrunk the supermodel. Kate Moss ushers in the era of the waif. Naysayers also dub it “heroin chic” for the gaunt look associated with Seattle’s grunge music scene. At 5’7” Moss is undeniably petite for a model and thin, even by industry standards. It’s a firmly unathletic look and a reaction to the Amazonian, uber-fit woman of the 80s.

Slouchy jeans, oversized fraying sweaters, and even unisex fragrances (CK One, we’re calling you out) all support the petite and androgynous waif look. Hollywood also embraces the look. A-list 90s actress Winona Ryder is so petite, costar Ben Stiller exclaims, “She’s like a little figurine for the coffee table!” 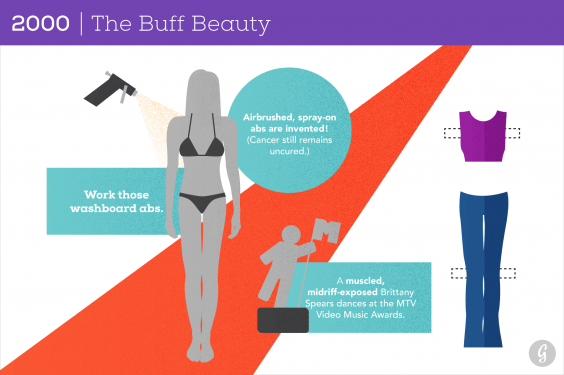 Supermodel Giselle Bundchen brings sexy back, according to Vogue. She’s credited with ending the era of “heroin chic.” Gone is the pale, gaunt, glass-eyed look of the 90s. Now we enter an era of visible abs and airbrushed tans. Bundchen is crowned “The Most Beautiful Girl in the World” by Rolling Stone magazine and dominates the runway, print ads, Victoria Secret’s lingerie show, and the red carpet on Leonardo DiCaprio’s arm. Hollywood actresses follow her lead hiring a small army of personal trainers and layering on a couple coats of spray tan during awards season. 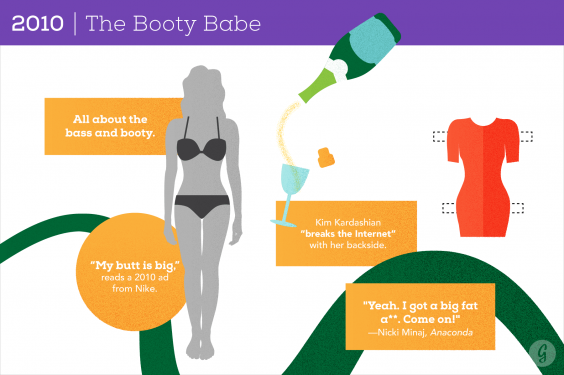 Two words: booty bonanza. That’s this decade’s contribution to the shifting landscape of women’s body image. Twenty years after Sir Mix-a-Lot sang “you can do side-bends or sit-ups, but please don’t lose that butt,” it seems the media is finally carrying the banner. (Now that The New York Times is reporting it, we can officially call it: “Bootylicious” bodies have gone mainstream.)

Nicki Minaj and J.Lo release their tributes to the almighty buttock:Anaconda and Booty, respectively. In Anaconda, Minaj holds a workout session while backup dancers wearing shorts that read “Bunz” do squats to the beat. Subtlety has left the building. But is it empowering? Or exhausting?

Body ideals, like everything else in pop culture, are a trend. As Tina Fey wrote in Bossypants,“Now every girl is expected to have Caucasian blue eyes, full Spanish lips, a classic button nose, hairless Asian skin with a California tan, a Jamaican dance hall ass, long Swedish legs, small Japanese feet, the abs of a lesbian gym owner, the hips of a nine-year-old boy, the arms of Michelle Obama, and doll tits.” Rather than chase that preposterous laundry list of attributes, embrace what your momma gave you! And remember: The media’s idea of beauty is subjective and changes, but confidence is always in style.

I would like to thank you guys for the huge contribution you have made in getting me to where I am now.  I have not had this much “control” over my body or felt it functioning as properly as it does now, for years.   I know there is still a long way to go, but I could not be happier with the results so far.  I could not have imagined when I started in November that I would be as pleased as I am.

Pedro, I don’t know how you ever thought this body would be “trainable” if I look at the “state” I was in when I arrived, but thank you for your dedication and devotion in personalizing my training to my specific needs.

I really love my classes, be it personal or group, it is the highlight of my day and I always leave your studio feeling better physically and emotionally than when I arrived there.

You guys are absolute stars, I appreciate what you are doing and cannot possibly thank you enough.

Please just never stop, because that will be a disaster for me!!!!!!!!

Thank you so much